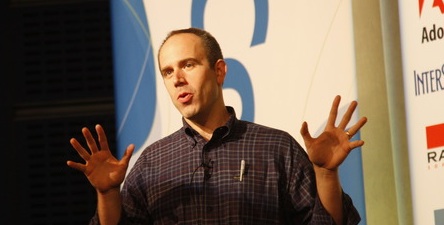 On-stage at QCon London this week, Dion and I gave a demo of Bespin. After spending a few minutes building up to the demo, emphasizing how fast Bespin performs, how it scales to tens of thousands of lines, beats DOM-based editor approaches–the usual litany of claims–I proceeded to mash on the keyboard and demonstrate that Bespin’s performance was… decent on a hundred-line file and, as it turned out, “slow as molasses” on thousand-line files. (Still, the most embarrassing moment of the talk was to come later, when Dion talked of his hurrying home after school every day as a youth to “twiddle his paddle”; that’s another story.)

Just days before, Bespin was wicked fast. What happened?

I thought it might be interesting to explain this little performance regression.

Shortly before launching Bespin, we decided to cheat on supporting tabs in the editor. Our initial code didn’t support properly displaying tabs so we decided to convert any tabs in a file to a fixed amount of whitespace when such files were imported. Obviously, this is unacceptable and we knew we had to get to real tab support in the future.

To be clear, I hate tabs. They are evil, loathsome little control characters, and the programmers who use them are the sorts of people who go out on weekends to weird nightclubs where they hang out with the hippies who put curly braces on new lines.

Speaking of nightclubs, Netscape alumnus and nightclub owner Jamie Zawinski has written an interesting piece that discusses tab support in editors. Essentially, he concludes that tab characters should be removed entirely from files in favor of spaces–that editors should transparently remove them on save.

As much as I agree with this perspective, and as much as I don’t want to add tab support to Bespin, one of our goals with the project is to be a great editor for all kinds of programmers; even the tab-using ones. So, I have to stop whining and support them.

There are two basic ways to add this support. Tabs can either be present in the editor and rendered as a certain amount of white space, or they can not be in the editor but instead be inserted when the file is written to disk as a sort of compression scheme (i.e., one tab character is used to represent one or more spaces).

Of those two approaches, the latter would be quite easy for us to implement. We’d simply scan each line in the file for spaces when saving and when one or more spaces occurs immediately before a tab stop, replace it with a tab character in the file. Ten minutes work.

But would you believe that there are some people who, in addition to wanting real tab characters in their files, actually mix tabs and spaces? Yes, it’s true. There are even file formats which depend on this sort of thing. Horrors!

So I can’t do the easy thing and just deal in terms of spaces at run-time in the editor. I have to support putting real tab characters in the file during the edit session, and distinguishing such characters from spaces.

Bespin backs each row in the editor with a string array; each character is represented by an element in the array. Because Bespin is limited to fixed-width fonts, we’ve been able to get away with easy measuring operations, like calculating the pixel width of a line by multiplying the size of the line’s array by a standard character pixel width:

We then use this measurement to determine whether the line will entirely fit in the editor without horizontal scrolling.

As it turns out, we need to measure the width of a line quite often. In fact, we have to know the width of every line in the editor, regardless of how few lines are currently visible in the window, in order to properly render the horizontal scrollbar. That’s because every editor I’ve seen sizes the horizontal scrollbar according to the widest line in the entire file, regardless of what’s currently visible.

Because obtaining the length of an array and multiplying it by some value is so cheap, we’ve been able to get away with measuring each line in the file very, very often.

And, this is what drove our vaunted performance right into the floor. You see, with tabs, measuring the width of a line is no longer quite so cheap. We now have to scan each character in the line to see if it is a tab character and then work out how much whitespace the tab character represents. Here’s roughly how we do that now:

Modified extract from Bespin for measuring lines with tabs

Hey, wouldn’t you know, executing this code once per every line on every repaint is considerably more expensive than the previous code sample.

While perhaps we could find more efficient ways to measure the length of a tab-riddled line, even when the algorithm was based on the length of the line’s backing array this represented a bottleneck that would have manifested itself eventually. Performance was degrading linearly in inverse proportion to the length of the file; tabs makes the degradation exponential, but either way, it’s unacceptable. We didn’t care about the degradation at 50,000 lines, but at 5,000,000 lines, we probably would have.

Maybe a better answer would be to measure each line once and then re-measure the line only when it changes. Genius! But, in reviewing our current code that marks lines as “dirty”, I discovered that it’s incomplete; there are many line mutations that merrily skip the dirty codepath. I didn’t want to get distracted by fixing this bit of infrastructure (which might have introduce yet more side-effects), so I moved on past this option and searched for another accelerator.

The next obvious approach would seem to be to only measure those lines that are presently visible. The disadvantage is that the horizontal scrollbar will size itself only according to what you can see; so if all of the visible lines fit in the editor window but somewhere a few pages down there are some super-long lines, you’d see no horizontal scrollbar at all. Better this than our present slower-than-CRuby-on-a-good-day behavior (har har), so I implemented it.

Dion and I were a bit intrigued by the result. We expected to be a bit off-put by a horizontal scrollbar whose width changes as you scroll vertically, but because Bespin’s scrollbars are a bit subtle with the transparency and all, it actually seems more cool than jarring. And, in fact, as we think about it, we can imagine some users preferring this behavior over the traditional behavior. 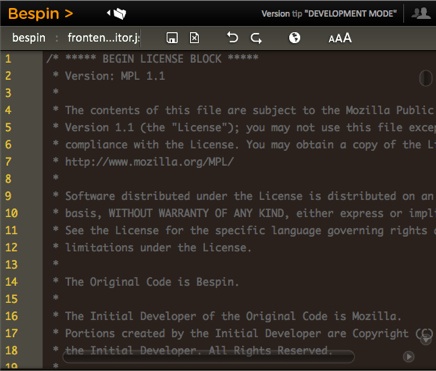 What do you think?

(The public Bespin instance doesn’t yet have this behavior; it will in the next day or so. By the way, all the inflammatory statements in this post, such as tabs are evil, etc., are just jokes. Mostly.)

I modified the section on Jamie Zawinski after Ted Mielczarek rightly pointed out that I completely misquoted him. I wrote this post on a plane without access to Jamie’s piece, and my memory was obviously faulty. Still, the spirit was the same–we both hate tabs.

37 thoughts on “Of Tabs and Performance”