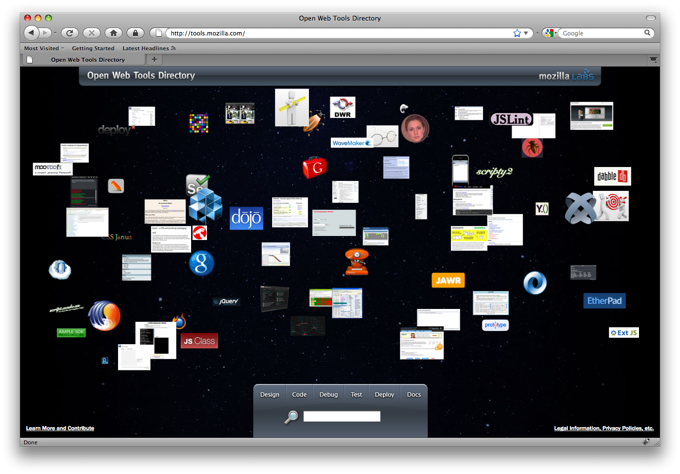 Just published a couple of blog posts earlier this week announcing the release of another project we’ve been kicking around here in Mozilla’s Developer Tools lab: a directory of the universe of tools to help web developers. The Ajaxian post goes into some detail on the technology behind it. Like Bespin, the directory uses HTML 5’s canvas element extensively. Unlike Bespin, there’s no compelling technological reason for this decision; we’re exploring different ways to visualize the data and we wanted to achieve a dynamic floating universe of tools.

We’ll be spending a great deal of energy in building up the directory and turning it into a vibrant, living resource for web developers, and we’d sure love to get your feedback on what you think we should to do it. Because the data is all available via a simple JSON format, we’re also keen to see other folks create their own custom front-ends for it. Who knows, perhaps a few other alternative interfaces will land in the coming weeks or months (we’re releasing a fully accessible version for the vision-impaired soon, btw).

I also want to give a special thanks to Mike “Morgamic” Morgan and Laura Thomson, two members of our incredible web development team at Mozilla, for tons of help getting this project going.

It’s been nothing short of a blast to work on this project. I’ve spent a good deal of time developing software on desktop platforms and here the web platform delivered the best of both worlds: easy-to-use graphic rendering API coupled with trivial network access built-in. And the performance! While a GPU-powered version would blow away the performance of the current version of the directory, I’m fairly certain that the web’s software rendering performance is comparable with the major desktop platforms software equivalents (e.g., Java2D, GDI, etc)–and I can’t wait to do a canvas 3D version to compare GPU-backed performance.